Koh Phangan was by far our favorite location last time we were in Asia, so we decided to go back. Unfortunately for us, Koh Phangan is also the site of the world famous Full Moon Party, which is an absolutely massive beach party known for techno music, massive amounts of drugs and general debauchery. We might have gone ten years ago, but now, it’s just a huge event that’s going to fill up guesthouses. We decided to go to Koh Tao until the Full Moon crowd passes.
We got off the boat in Koh Tao with bout three dozen other travelers and a couple locals. We were all immediately slammed with people trying to put us up in their guesthouses, but we walked past the touts and caught a “taxi” to Hat Sai Ree. “Hat”, “Had” and “Haad” are all different spellings of the Thai word for “beach”.
More people get their PADI Open Water SCUBA diving certification on Koh Tao than any other place in the world, including Leslie and I, three years ago. It was fun, we were glad we did it, but this time, we were here just for the island and the small town of Sairee.


“Taxis” in the southern islands of Thailand are pickup trucks with metal benches running along the side of the back. Riders sit up above the bed of the truck. There are no seat belts. Usually, the only safety feature is a roll-bar and if you’re really lucky, there will be a canopy to keep the sun and rain off.
This one had no roll bar and no canopy. When we arrived in Sairee we got off and walked towards a restaurant we used to frequent. Fortunately, the restaurant was still there, but prices had doubled and quality had been cut in half.
We found a bungalow for 300 baht ($10), although this one was not the nicest. Cold water showers, a bathroom that was open to the outside and it lacked a bug net. That said, it was 300 baht in one of the more expensive islands in Thailand, so we didn’t complain too much. I should probably explain at this point that most Thais don’t like the beach. In most of Asia, dark skin is seen as a mark of being lower-class, so Asians try to avoid the sun and buy products with whitening cream. So the sun burns you, the sand is a mess and gets everywhere and it’s altogether too hot. Most Thais don’t understand Westerners desire to hang out on the beach. 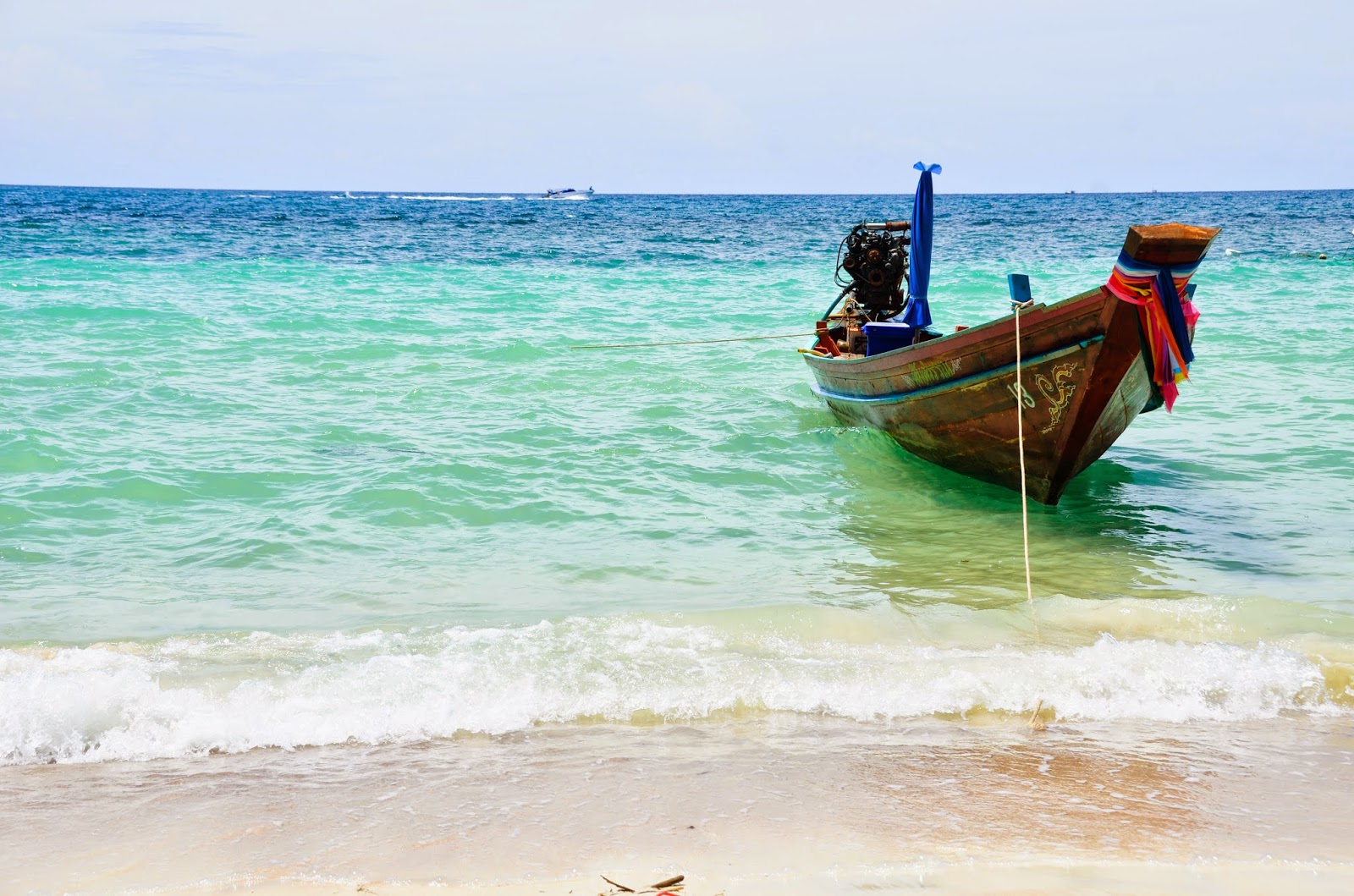 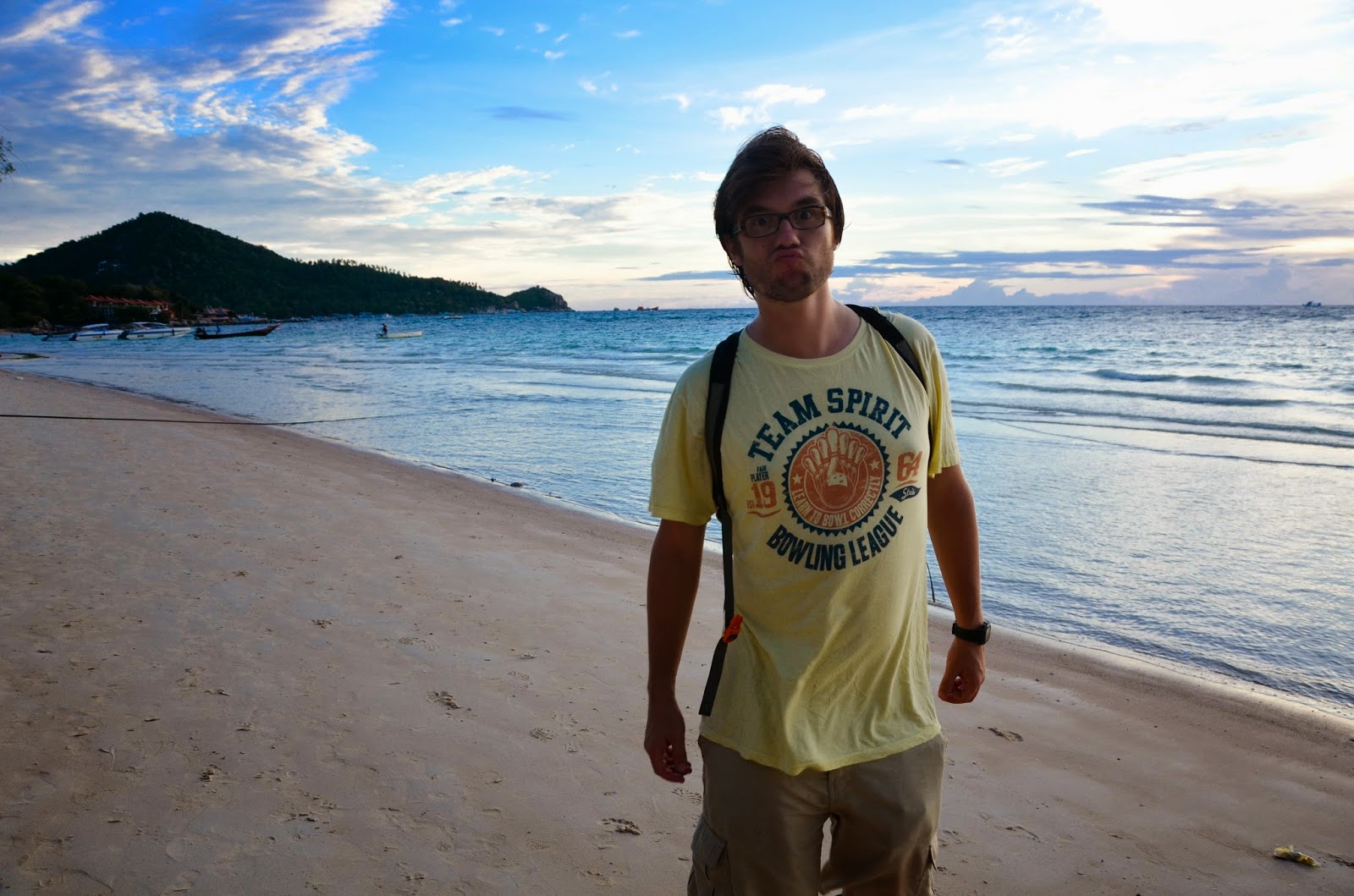 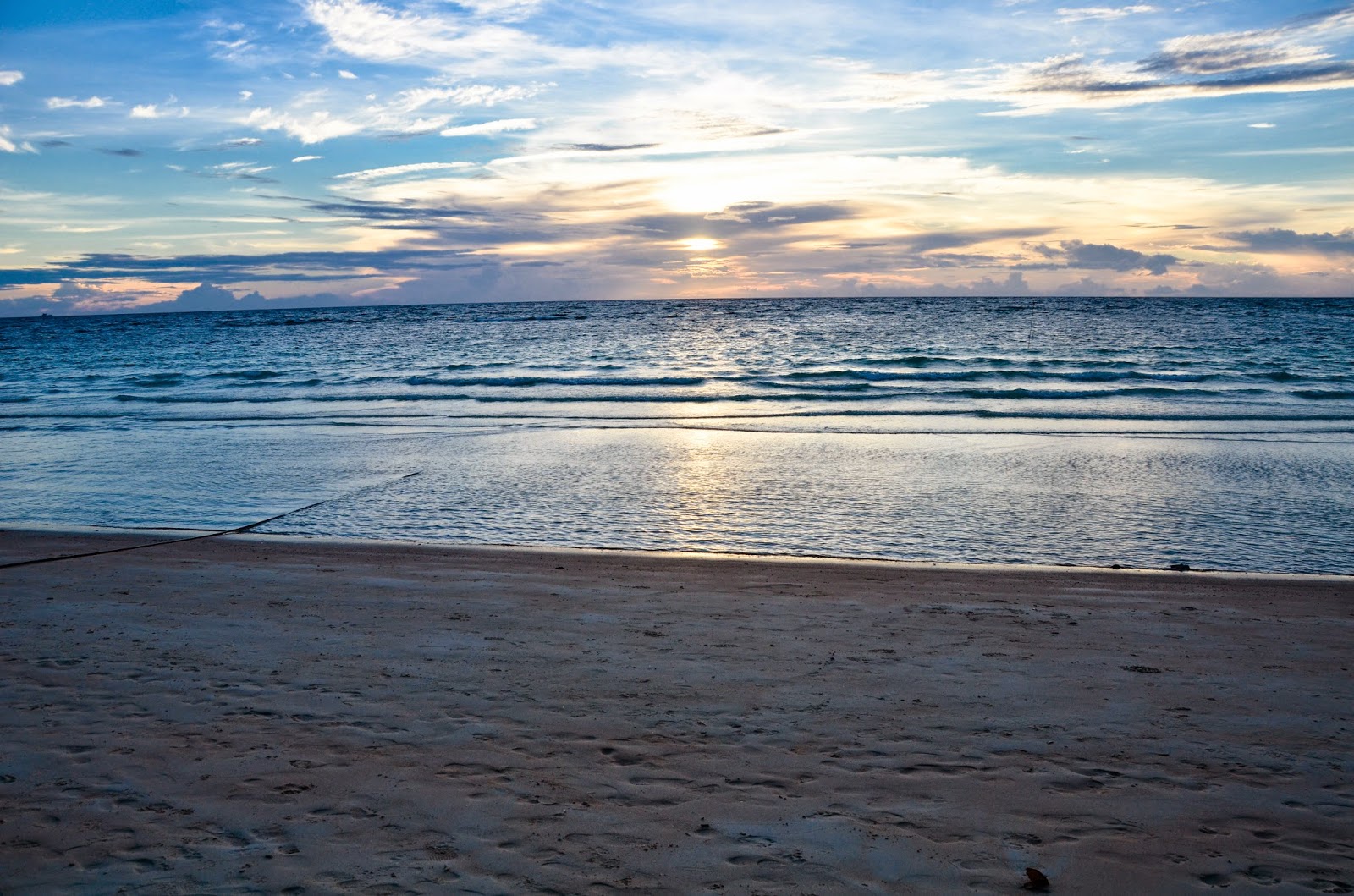 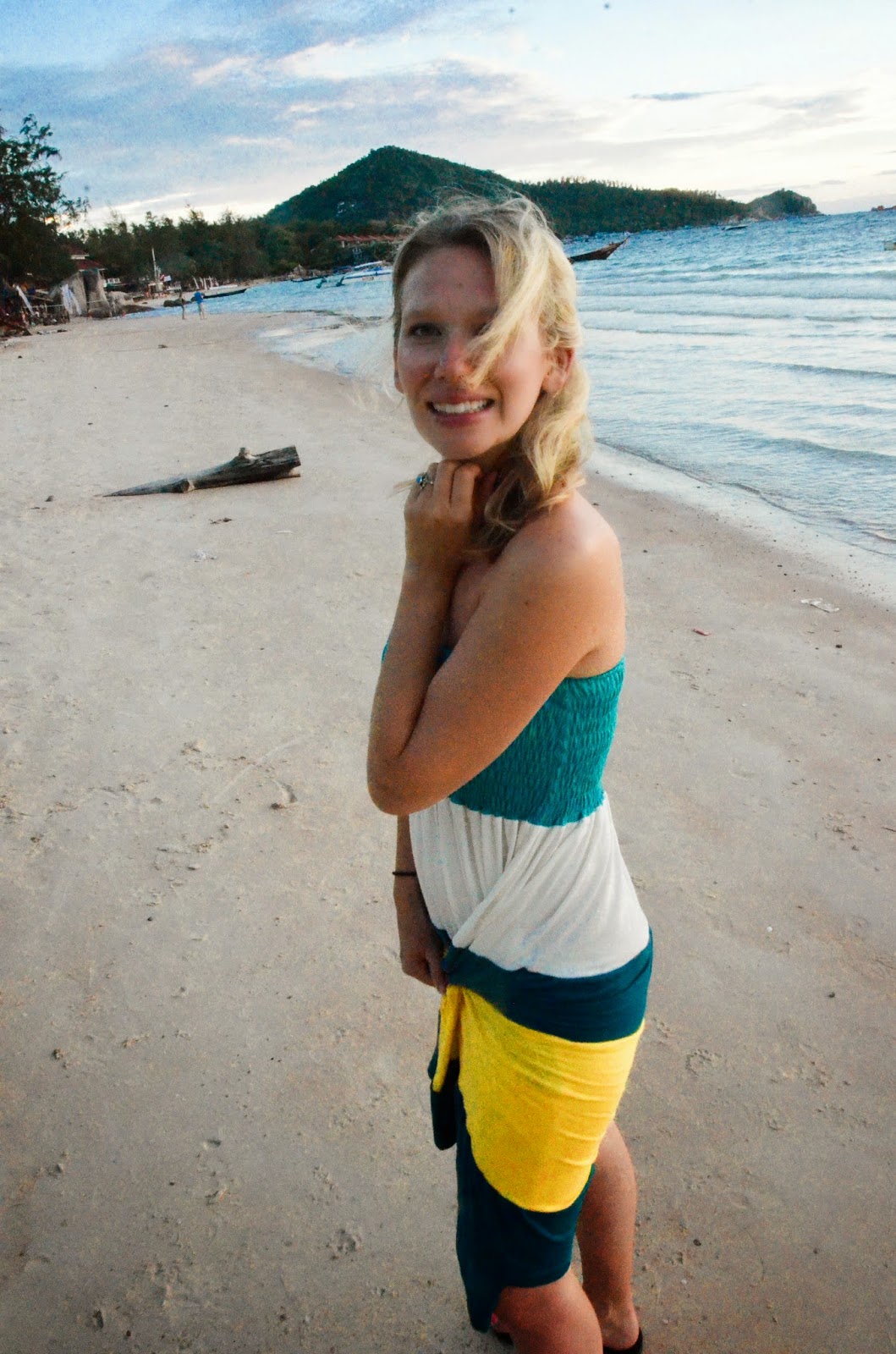 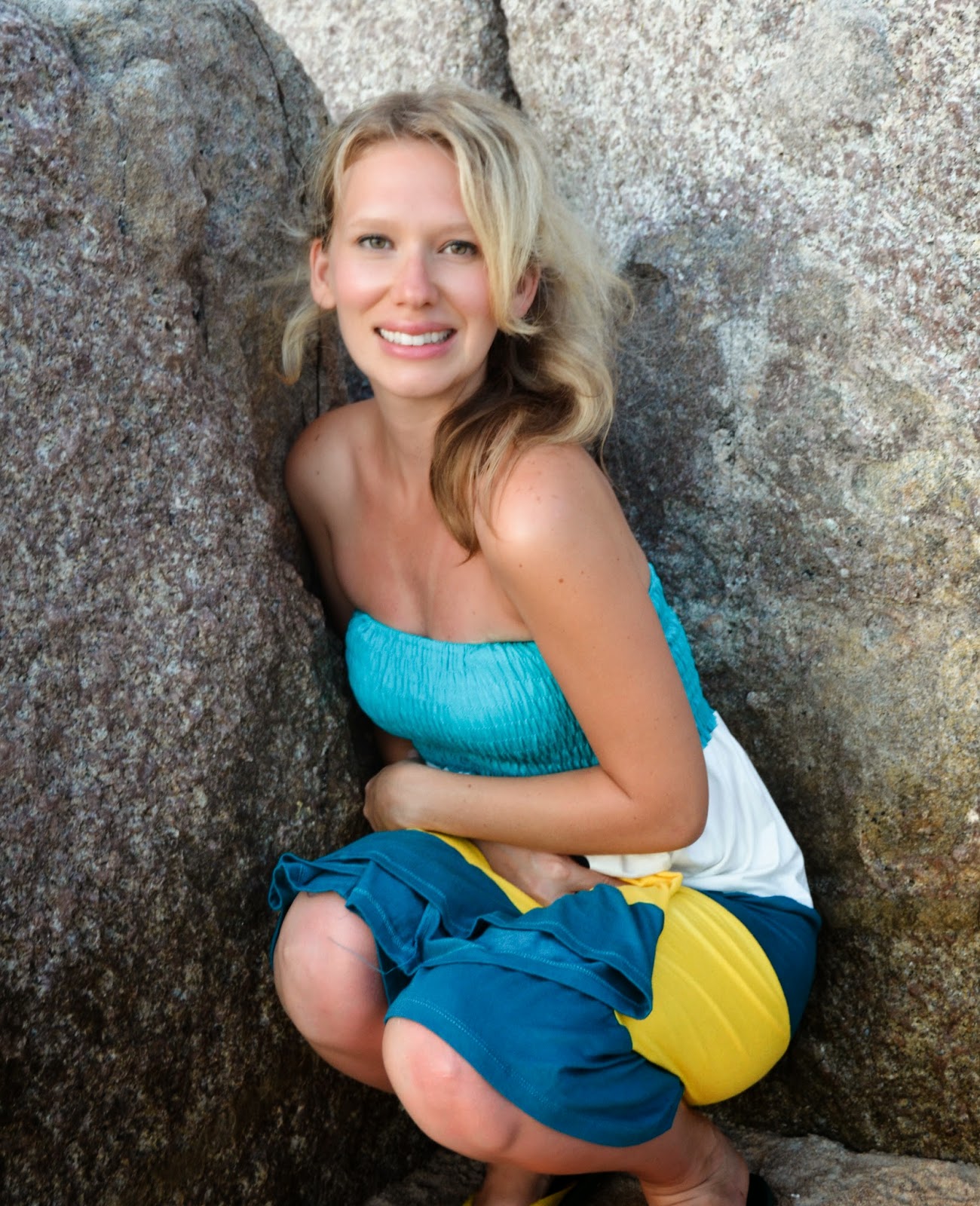 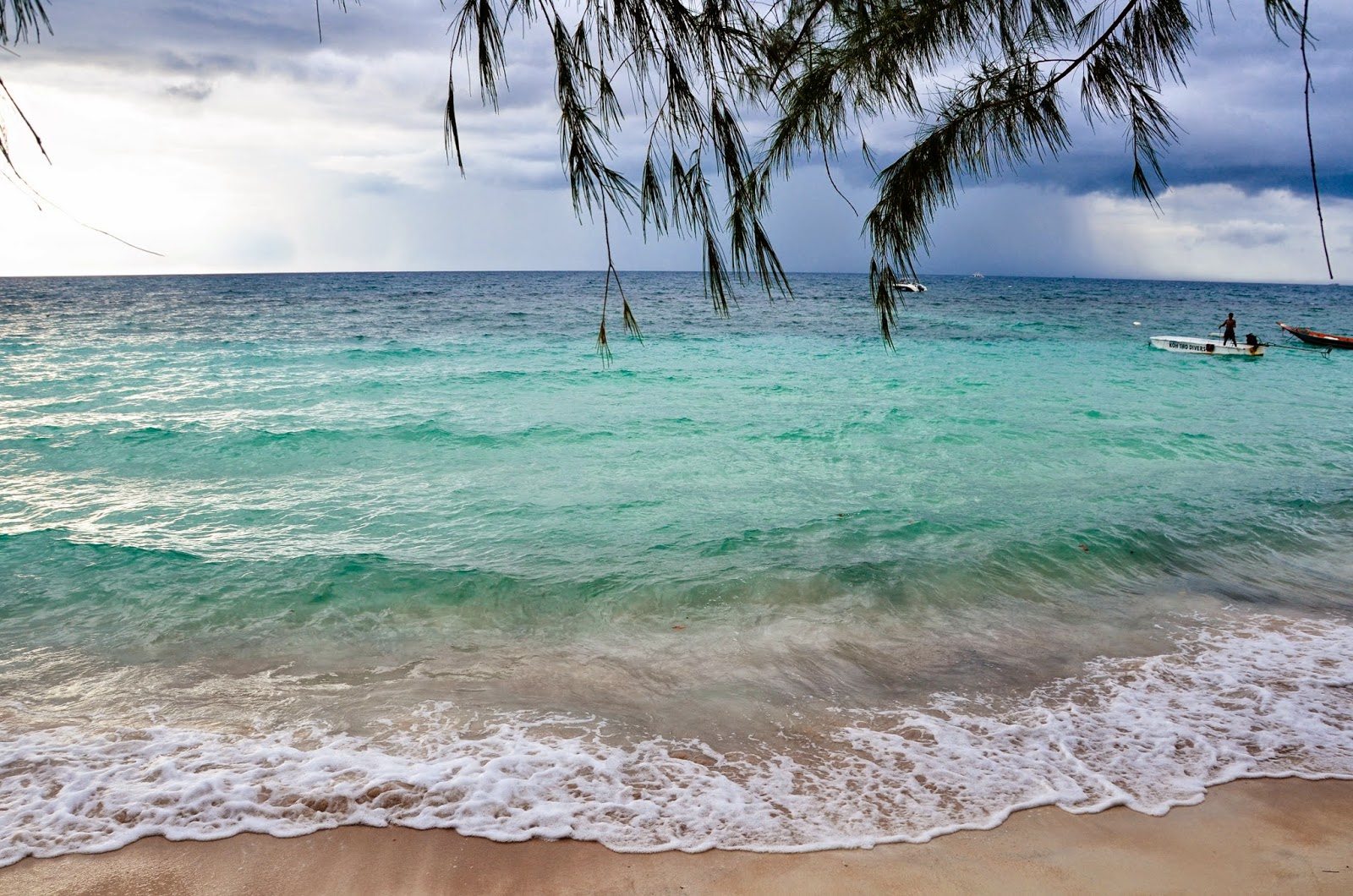 You can see this reflected in the mid-sized beach town that is Sairee. There’s dozens of shops and restaurants, but they’re geared towards the backpacking crowd. Dive shops are often filled with Western workers (often Aussies) and many of the popular restaurants are the same. Restaurants advertise western movies that they play nightly to entice customers. 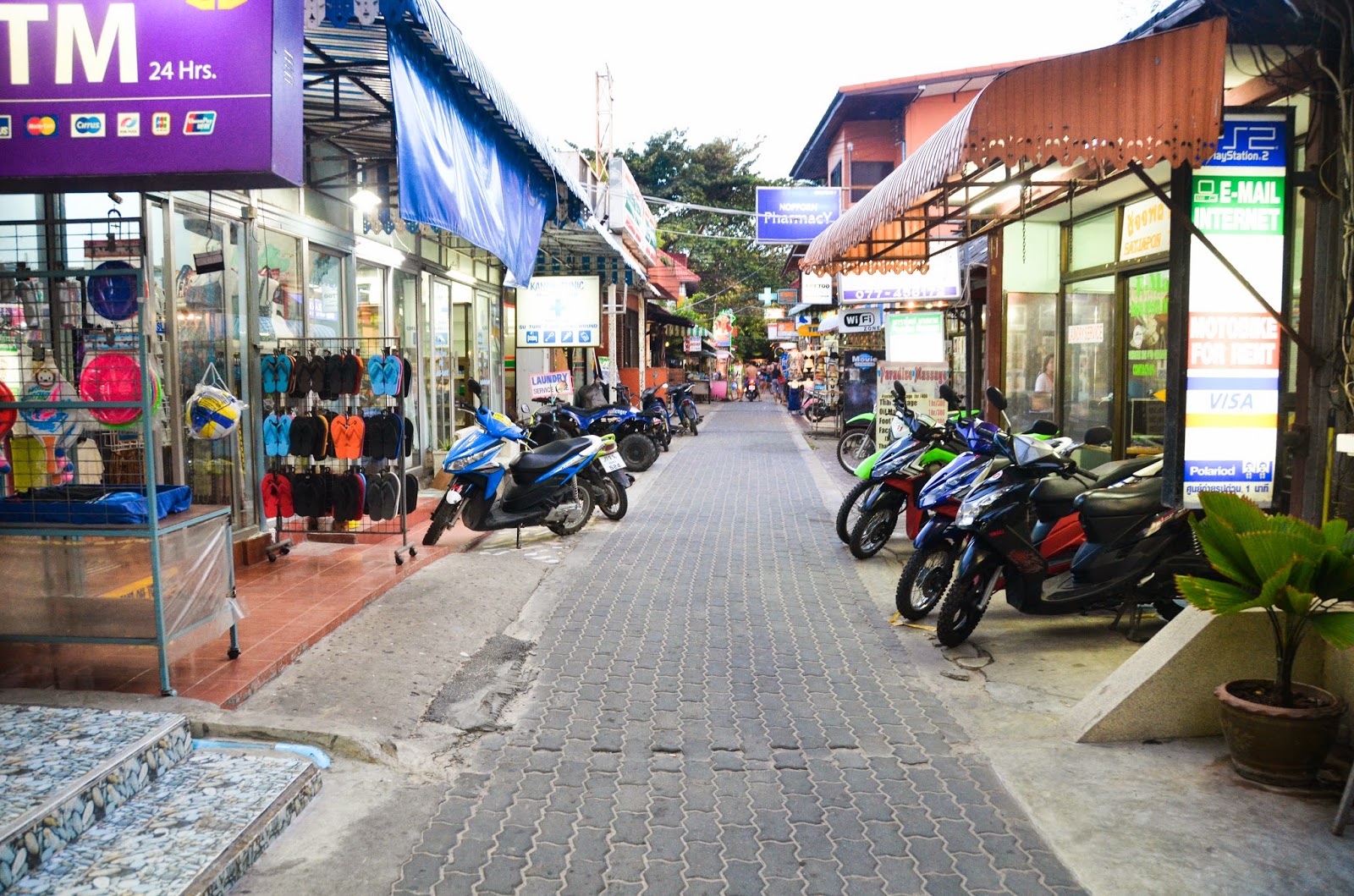 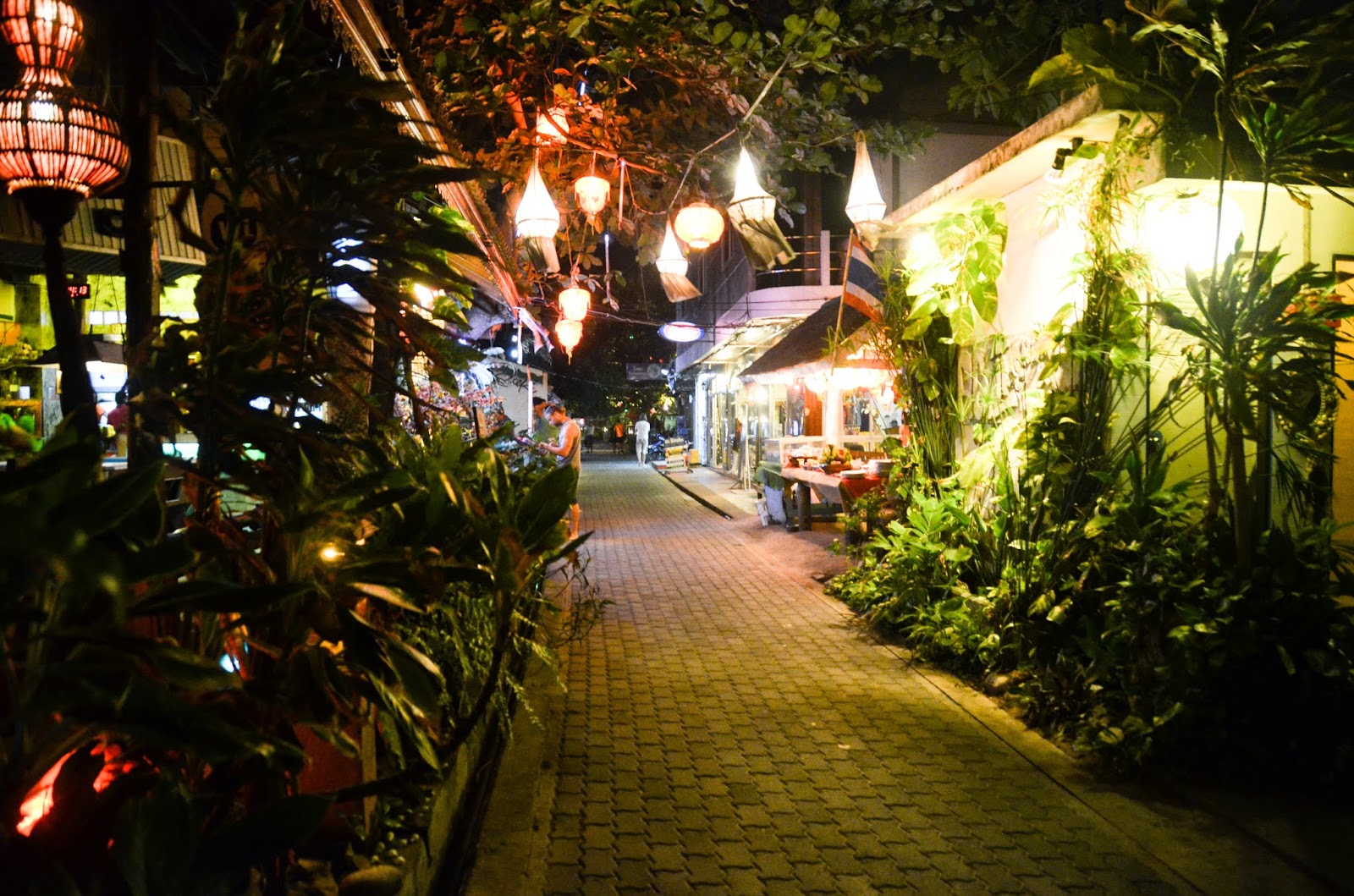 That said, the places run by Westerners are almost always more expensive. We ended up spending a disproportionate amount of time at a restaurant/pub called Moon Bar. It was cheaper, but most importantly, you could claim a table by the beach to put your stuff while swimming in the ocean. We got adopted by a grey and white dog that kept hanging around Leslie.
Make no bones about it, we went to this part of Thailand to go to the beach. We’ve skipped the beaches almost everywhere else we’ve been, because we knew that once we reached southern Thailand, we would see some of the world’s best beaches, and Koh Tao didn’t diappoint.
Pristine sand ran up and down the beach as boats floated offshore, anchored to the ground. “Long-tailed taxis,” which are skinny, brightly decorated boats that run on outboard motors. The propellers whirls twelve feet off the back of the boat, giving the famous boat its name. Mid-sized, weather worn fishing vessels float with a couple yachts for richer people and a plethora of dive boats, with their SCUBA Shop name painted on the side.
For us though, we mostly splash and jump around the water in between spurts of hanging out on the beach.
I think I got stung by something at one point though, because we were walking back to our bungalow when I realized my left quad had gone numb. We found the doctor’s office, but he was closed for the day, so went to one of the half-dozen pharmacies. The pharmacist recommended some Tiger Balm. I don’t know if it helped or not, but the leg returned to normal a few days later.
We also made an attempt at getting to a more remote beach on the other side of the island, but they wanted $20 to get there, which is almost 1/2 of our daily budget. We decided against it, but after a couple days in our beatup, dirty and bug-ridden bungalow, we decided to splurge and checked into the In Touch Bungalows for a day. 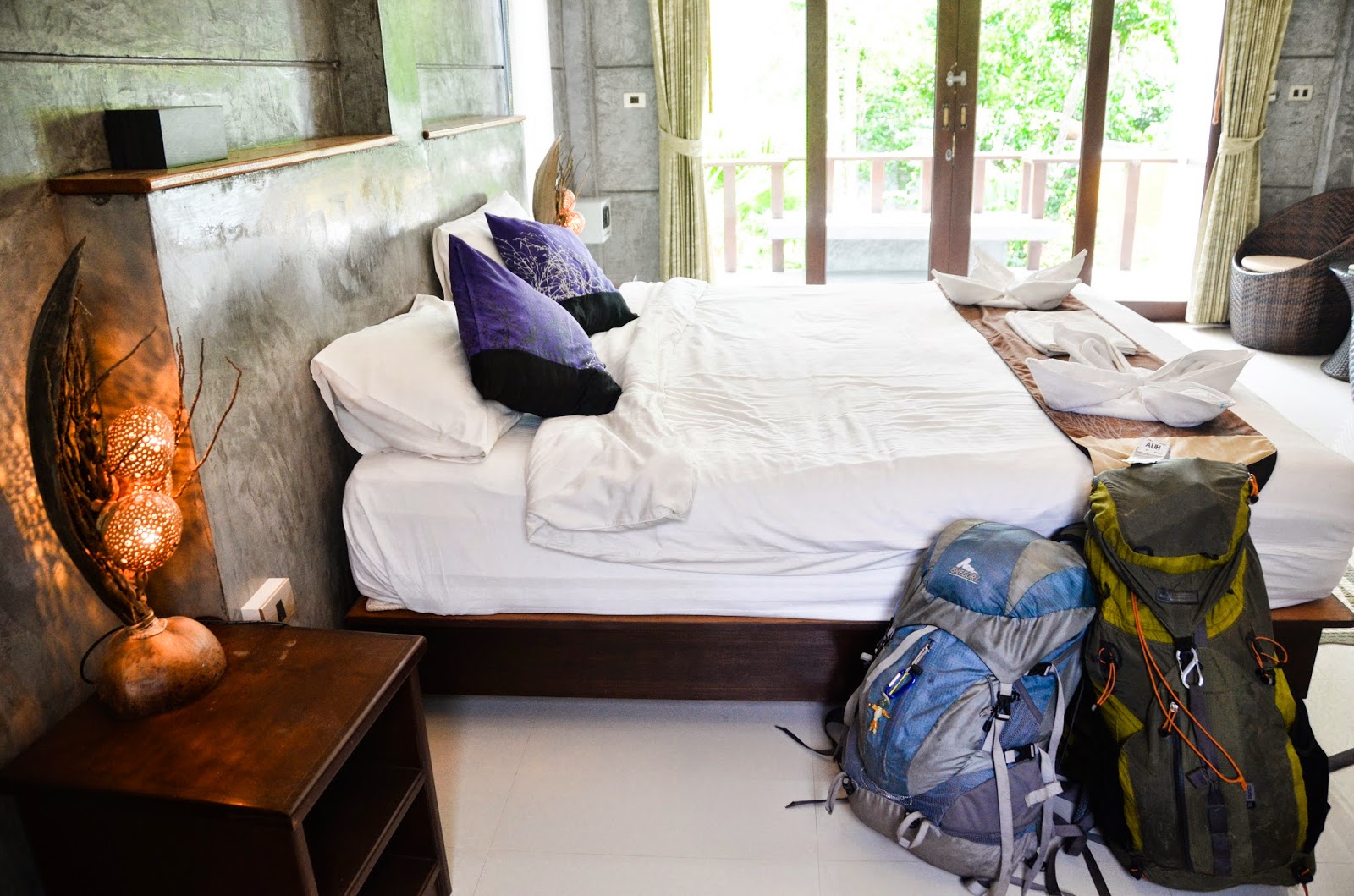 Air-conditioning, dirt-free floors, movies and no bugs was our expected reward for the day. Ever single one of those came true.
Unfortunately, after about two hours the bathroom began to smell like a poorly maintained Honey Bucket… and these weird little slugs began appearing in the bathroom.
No matter though, we shut the door to the bathroom and flinging slugs out the window became a chore to accomplish every few hours.
We spent our day watching terrible television and some movies, but they were in English, so it was great. It was a clean, modern mattress, so we wanted to sleep in. The little town of Sairee was going to look like the apex of civilization compared to the beach we had in mind for Koh Phangan, so we wanted to take full advantage of our chance to sleep in a modern bed.
We spent one last day hanging out on the beach of Koh Tao, watched “American Reunion” in an air-conditioned beach bar and purchased a ferry ticket to Koh Phangan.